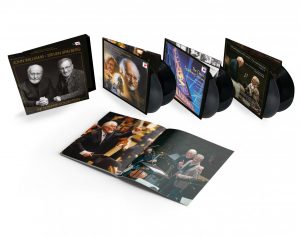 Music on Vinyl and Sony Classical prepared a vinyl release of the March CD box set retrospective JOHN WILLIAMS – STEVEN SPIELBERG THE ULTIMATE COLLECTION. This is an awesome edition that contains three 2LP albums on separate gatefold jackets housed in  a box with a 16 page large format booklet with pictures and liner notes.

This release actually brings together two 90s collections of John Williams music from the Steven Spielberg movies, the “SPIELBERG WILLIAMS COLLABORATION” that Sony Classical released in 1991 and the “WILLIAMS ON WILLIAMS” that was released in 1996, and a third collection of themes that was recorded 20 years later in 2016. The first two collections were recorded with the Boston Pops Orchestra for which John Williams worked as a conductor until 1993 and the most recent one was recorded with the Recording Arts Orchestra of Los Angeles. All three albums offer a very well constructed program of specially created small suites and themes that reveal the talent and unique composing and orchestration abilities of the legendary composer. To mention some of these remarkable renditions, I would choose the two themes from 1975 JAWS, mostly the “Out to Sea/ The Shark Cage Fugue” which brilliantly blends two magnificent individual and very important music moments from the film. There are some moments – especially with the Boston Pops – that do not reflect the vibrancy and energy of the original performances – the “Jim’s New Life” from  THE EMPIRE OF THE SUN being one very notable example – but the overall presentation is very satisfying and professional. I shouldn't forget to mention the brilliant "Escapades for Alto Saxophone and Orchestra" from CATCH ME IF YOU CAN (included in the second LP of the third and most recent recording) that were recently nominated for Grammy award in the "Best Arrangement, Instrumental or A Cappella" category.

The vinyl box set omits the DVD that is included in the CD box which contains the documentary “Steven Spielberg-John Williams: The Adventure Continues”. The box is strictly limited –according to Sony’s press release – to 1500 hand numbered copies and this is a huge motivation for the collectors to acquire a copy. I’m not sure about the sound quality of these pressings but the vinyl box set price is 5 to 6 times larger than the cd box sets, and the expectations are very high for me for this price tag. I hope this won’t be another attempt to cash in on vinyl’s expanding popularity in the music market.