Intrada label announced its December 2017 releases and among them the complete and properly presented Jerry Goldsmith score for the 1977 sci-fi movie "DAMNATION ALLEY". The announcement was more or less expected after the small samples that were uploaded in the Intrada forum by Roger Feigelson and caused enthusiasm among the fans. This is the first time that this magnificent score is presented on disc in its original movie form which means that the synthesizer enhancements and overdubs that accompanied the orchestral score and provided an additional dramatic drive to the Jack Smight movie are presented for the fist time in a recording, 40 years after the movie's release.

Varese Sarabande had released in February 2004 a monumental box set of 6 discs as a retrospective to an amazing Jerry Goldsmith career and inside its sixth disc we can find a 19 minute program divided in 9 cues with the movie's score. The problem with this first ever presentation of the score was that it was missing very crucial parts of the score and in specific cues the parts that were composed with synthesizer were missing, for example in the "Into The Valley" cue the most important part which is the synth repetitive effect that boosts the anxiety and suspense of the scene is missing. Varese stated in the booklet that the only found element of the music were the cans with the orchestral score and the synth overdubs were never found.

Intrada, with the aid of the acknowledged musician Leigh Phillips, attempted to re-create the synthesizer effects and music the maestro composed and were missing, and after so much time of waiting at last we have the full soundtrack of "DAMNATION ALLEY" in its entirety for the first time. And by writing "entirety" we literally mean entirety.

Below you will find a presentation of all the moments in the movie where music is applied and a cross reference of them with the contents of the two releases of the score until now, the 19 minutes of the Varese Sarabande box set and the Intrada fresh release. Major spoilers could not be avoided but we are not revealing everything. I hope you'll find it enlightening: 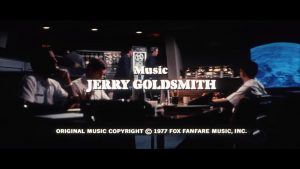 The excellent intro with the four note theme that is played during the opening credits sequence is present both in the Varese box and in the Intrada release.

First scene after the opening credits is musically accompanied with a synth pulsating rhythm and ominous, threatening rendition of the four note theme. Both Varese and Intrada releases include this cue (“After The Holocaust” in the Varese one, “A Different World” in the Intrada cd).

The two principal action motives of the score (four and six note) are performed simultaneously blending in an exciting brilliant cue as Tanner (J.M.Vincent) tries to reach the shelter with his motorcycle avoiding giant Scorpions. Varese omits the hugely functional synth rhythmic layer as explained above ("Into the Valley" cue). Intrada includes the cue as “Valley of Death”. Both cd versions are 20 seconds longer than the movie one.

Denton (George Peppard) drives the landmaster out of the silo for the first time, a little after the base destruction. The Varese box (“The Landmaster”) contains 40 seconds of music that is not in the movie and as it seems the same happens with the Intrada cd cue. Scoring in the movie begins after the silo opens and immediately infuses awe at the appearance of the vehicles.

The four survivors - Perry (Kip Niven) and Keegan (Paul Winfield) in the one vehicle and Tanner and Denton in the other- leave the destroyed  base (synth effects). Doesn’t appear in the varese box. Curiously, the Intrada cd cue (“The Voyage Begins”) appears to be 35 seconds longer in duration than the one that appears in the movie.

After the two landmasters fall in an unexpected storm, Landmaster 2 is hit by a blast and looses contact with the first vehicle. Landmaster 1 realizes something is wrong and search begins. Score ends after Landmaster 2 is found. Extremely adequate score, takes over after the storm ends and Landmaster 2 realizes that contact with 1 is lost. Excellent action cue with the six note theme highlighting the tension. Amazing synth layers provide additional drive. Varese box omits this cue. Again, the Intrada cue (“Signals”) is 19 seconds longer than the movie one.

Landmaster with Tanner, Denton and the newfound passenger Janice (Dominique Sanda) ride across the desert. Music is propulsive and gives a boost to the Landmaster running sequences, with a part of of calm, melodic interval of optimistic dialogue among the three passengers in between. Repetitive synth tune offers appropriate accompaniment to the Landmaster speeding its way through the empty desert. Magnificent piece of music that was missing from the Varese box and present in the Intrada cd.

Keegan and Denton are attacked by mutant cockroaches while Tanner and Janice realize the cockroach danger during their ride with the motorcycle in an empty town and find themselves trapped inside a building. The Landmaster drives to their rescue. Perhaps the most exciting cue of the score, begins in a low key threatening mode and develops into an amazing action and agitating composition accompanying the straggle of Tanner and Janice to get out of the building with the bike. Escape success is boosted musically with synth layers over the orchestral climax. Luckily this cue has its amazing synth enhancement intact in the Varese box.

The Landmaster team arrives in a remote house and find a young boy (Billy-J.Earl Halley) who is very reluctant to trust them and attempts to escape. Tanner chases him with the bike and catches him. Once again the score takes on a propulsive rhythm highlighting the straggle of the boy to escape. Varese includes the cue ("Finding Billy") and of course Intrada also ("A New Passenger").

More optimistic and uplifting theme for the Landmaster running into desert, with the team in a much better mood after finding Billy. Repetitive synth tune again present and the orchestra highlights the overall good vibrations of the passengers. This cue is not included in the Varese box. Intrada of course includes it in their program (“Refueling Stop”).

The passengers are trapped in a difficult threatening situation in a deserted Café that is occupied by vile hillbillies. They attempt to escape and go on the road again. Music starts when the passengers realize that they have a chance to escape a very nasty fate with a suspenseful synthesizer rendition of the 6 tone theme, develops into an agitating climax with brass and percussion and highlights with the Landmaster repetitive synth tone and full orchestral accompaniment as the team goes on the road again. Another one missing from the Varese box. Intrada cd includes it in their program (“Wrong Order”)

Passengers are preparing the vehicle for a dangerous storm that is coming. Sinister brassy cacophonies introduce an important moment of the movie.  The cue is included in both releases intact ("The Realignment" in the Varese box and "A Storm Brewing" in the Intrada).

Relief after surviving a huge storm. Music is very calm and melodic, the only part of the score so far that omits aggressive orchestral force and agitating rhythm. The Varese box and the Intrada cd seem to include a version that contains 1:12 minutes of music that was left out of this scene. Both cues have a duration of 2:19 minutes titled “Blue Sky” in the Varese box and “A New Day” in the Intrada cd.

Final cue before the end credits, an expanded and more developed part of the previous one. Wonderful optimistic melody by Goldsmith for the finale. This is the “Finale” cue on the Varese box and the “End Title” in the Intrada one. Actually this is not the End title cue, but Intrada lists it as that because the End title of the movie is a truncated version of this cue.