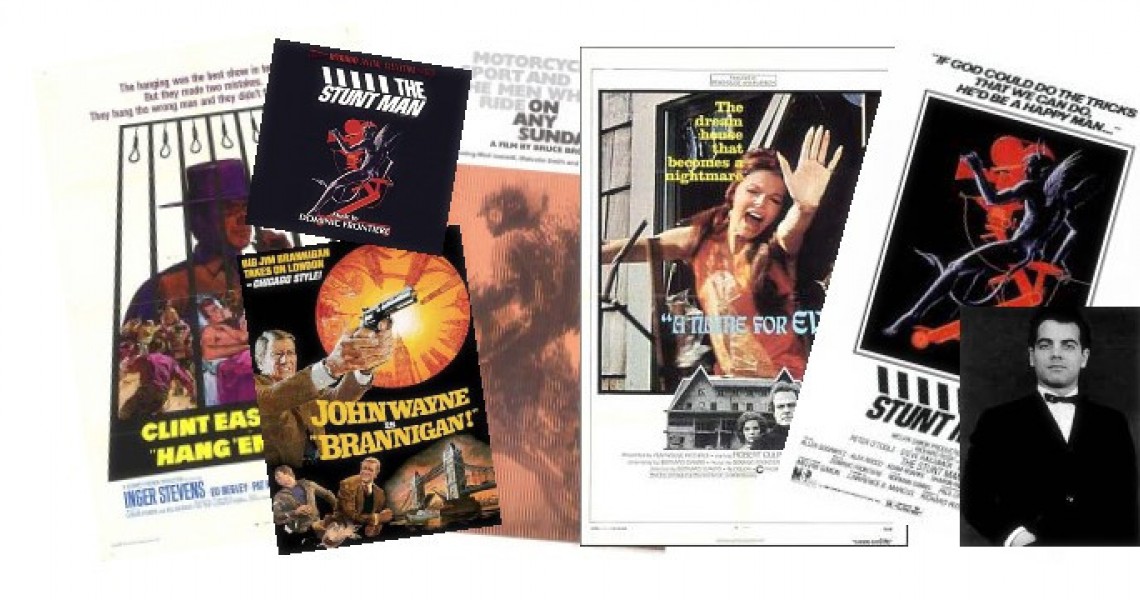 A few days before Christmas, on December 21st, Dominic Frontiere passed away at the age of 86. He had stopped making music for the movies and television for a long time but during his 40 year career as an active composer he offered some very distinguished works. The solid fact is that Frontiere worked for 25 feature films from 1960 to 1980 and the overall quality and popularity of his work for mostly mediocre or unimportant movies is amazing, showing that he could have done more having given more serious assignments.

As a retrospective to his career here i present five movie scores that depict Frontiere's ability to compose for every genre and under any circumstances creating memorable music and offering cinematic substance. 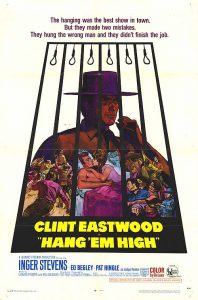 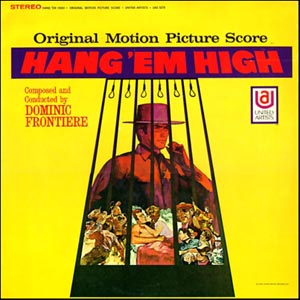 Dominic Frontiere had already established a successful career in television and had a major highlight with his music for BILLIE (1965) an uplifting musical with Patty Duke. The first really great movie score came with HANG EM HIGH, a movie directed by Ted Post as a vehicle for the career of Clint Eastwood in his straggle to avoid typecast with the "Man with no name" persona from his Sergio Leone westerns. I mean, yes, this is a western too but Eastwood's role is down to earth, a lawman with strong emotions and human reactions and not a ghost-like hero with almost supernatural intelligence and abilities. Dominic Frontiere entered the production with the task to create a "Morricone sound", a catchy tune that would stuck in the audience's mind and would identify with the hero. Producers believed that the audience would rush to the theaters expecting "The man with no name" in a new adventure and this tune would provide the emotional trick for the sound, since the vision of Clint Eastwood in western regalia was expected to attract the sight. Frontiere composed a very successful piece of music, rhythmic and robust, an effective musical intro to Eastwood's lawman in the producers' perspective. It plays in various moments in the movie the most significant one when Eastwood goes on the trail of a bunch of outlaws in a no dialogue lengthy sequence.

The real winner of the score, although, is the other dominating theme, that is the first musical impression of the movie right after the opening sequence's lynching procedure. A pessimistic and ominous main title, a two note powerful music comment on the movie's main topic, the question of what is fair justice and how it should be carried. I would dare to write that it could have been composed by Bernard Herrmann himself since the structure and orchestration is quite reminiscent. Thankfully this piece of music is the main theme of the movie, is placed in many crucial moments of it, and even includes a part of the "Hang em High" popular tune adapted according to the brooding orchestration of the piece. 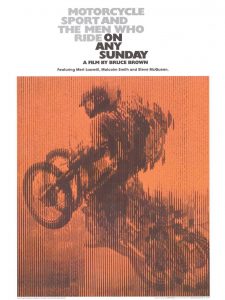 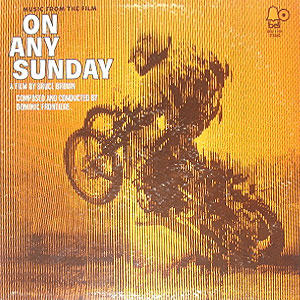 After the success of HANG EM HIGH, Frontiere took the assignment of making music for two westerns in 1970, Gordon Douglas' BARQUERO and Andrew V. McLaglen's CHISUM. Nothing really changed regarding the offers for job he had except that he begun his collaboration with the best - as he told - employer he would ever have..."The Duke". A year later he worked for the groundbreaking Bruce Brown documentary ON ANY SUNDAY, a very demanding assignment since due to the films narrative and directing style, a large amount of music was needed. Bruce Brown had directed the equally pioneering ENDLESS SUMMER in 1966, which had an enormous impact in spreading the "Surfing" culture, and now ON ANY SUNDAY presented with similar goals, the world of motorcycle sport culture and philosophy. Dominic Frontiere filled the movie with his uplifiting and energetic music, mostly pop and uptempo for the racing sequences but in places orchestral and aggressive depicting the dangers of the motor sport.

What makes ON ANY SUNDAY score important in my opinion - apart from the boost it gives to the dynamically edited racing sequences and the depth it provides to the bikers' characters that are presented - is the opening title song that accompanies in its entire length a bunch of young boys running and making perilous acrobatics with their bicycles. It encompasses all the free spirit philosophy of the two-wheeled sports and manages to elevate the sequence to such an extent that many people claim that it probably was the main influence for the outburst of the BMX bicycle phenomenon of the early 80s. 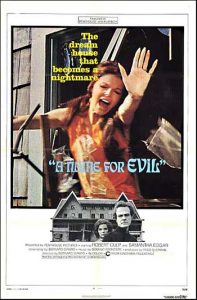 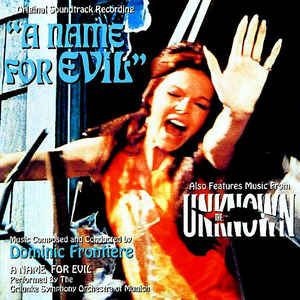 There is a moment in the career of most of the great film music composers that you wonder "why did he do this" and for Dominic Frontiere this moment came with his involvement in the music of this bizzare movie directed by Bernard Girard, a tv mostly director. It is almost impossible to explain the plot of the movie in a rational way and it is to anyone's wonder how Samantha Eggar and Robert Culp ended up playing in a movie like that, with Culp - apparently - exposing his genitals in their full glory in a delirious moment of the film (i'll explain below).

The movie was promoted as a horror film and perhaps its nonsensical narrative has to do with the bankruptcy of MGM while filming. Penthouse bought the rights and completed the movie but after watching it you are absolutely sure that an editor did his best to give a meaning to the existing filmed material. The problem is that the ending result is - to put it gently - bizzare and baffling. A couple faces marital problems and the husband (Culp) decides for them to move to a country mansion he inherited and renovate it. After they move there, a seemingly malevolent entity claims the house (verbally only!), a nearby small town organizes hippie parties with ritualistic orgies, nothing is connected with anything and after a while the end comes and the viewer wonders where his/her precious one and a half hour went. The only worthy thing in the movie is Frontiere's music. I mention the score to such an atrocious movie because not only it is amazing as a structure (with a distinct theme for the house and a wonderful romantic theme for the couple) but Frontiere shows his immaculate talent as a composer by utilizing methods like polyphony to enhance the mystery of the house while the narrative destroys every chance the music creates for the film to be saved. It was bad luck for sure for Dominic Frontiere to provide such an amazing and interesting score for a movie that shouldn't have come out to the theaters. As far as i am concerned this was the last time the composer had the chance to compose a score of such symphonic range. 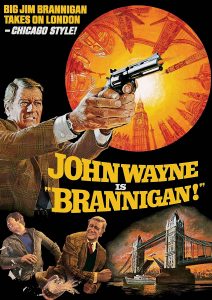 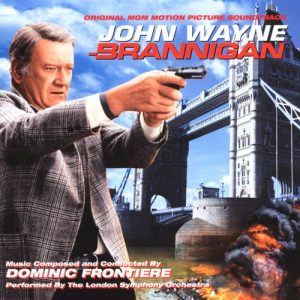 As i wrote in the text about ON ANY SUNDAY, Dominic Frontiere became John Wayne's permanent musical collaborator after the CHISUM (1970) score. After CHISUM, they worked together for the excellent TRAIN ROBBERS (1973 - I was very close to include it in this retrospective) and then BRANNIGAN followed two years later. BRANNIGAN was a very peculiar case of a movie, since John Wayne hired the acclaimed director Douglas Hickox who directed the superior SITTING TARGER two years before (magnificent British crime thriller with Olie Reed with a superb music score by Stanley Myers), but himself suffered from a deteriorating health and was quite old at that time (68) to support the role of a macho yankee detective. Then came Frontiere. It is amazing how brilliantly fit is his score for this movie. He avoids the harsh, dissonant at times music that usually accompanied the detective thrillers of the 70s and provided a more cosmopolitan, suave musical style that is strongly evident straight from the main titles theme. This theme works as a "protective shield" for the protagonist since it advances the virtues of a mature experienced cop than the machismo and the violent temper of a "Dirty Harry" type of detective. I must add that there is another amazing musical idea Frontiere unveils during a street surveillance sequence, when an action theme develops upon a cha-cha-cha rythm! Yes indeed, that's the way it sounds in my ears. Just listen on the following video. 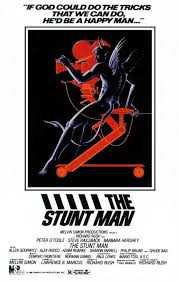 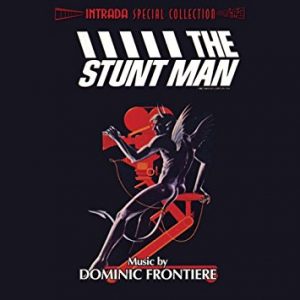 Dominic Frontiere worked with Richard Rush once more before the STUNT MAN score. It was the sensational FREEBIE AND THE BEAN in 1974. It took Rush six years to proceed with his next movie. Frontiere was again on the score, and eventually reached his first award with this, the golden globe for the best score in 1981 beating composers of the caliber of John Williams (THE EMPIRE STRIKES BACK) and John Barry (SOMEWHERE IN TIME). The final idea for the main theme of the movie came literally by mistake when Frontiere performed incorrectly an idea he had about it. The main musical idea for THE STUNT MAN is a march like melody that accompanies mostly the appearance of the character of Peter O Toole in the movie, a demanding and manipulative director who offers a fugitive a job as a stunt man on a movie set bringing him with his manners on the verge of paranoia. This lighthearted, circus-like music also accompanies the poor stunt mans ordeal during the various takes of the filming under the authoritarian conduct of the director. It is really exceptional how well it works in the film as a total contrast to the various incidents, showcasing the madness of a movie production and providing an almost surrealistic touch to the movie. A truly brilliant score. 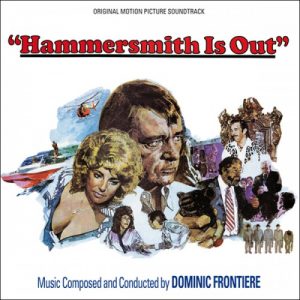