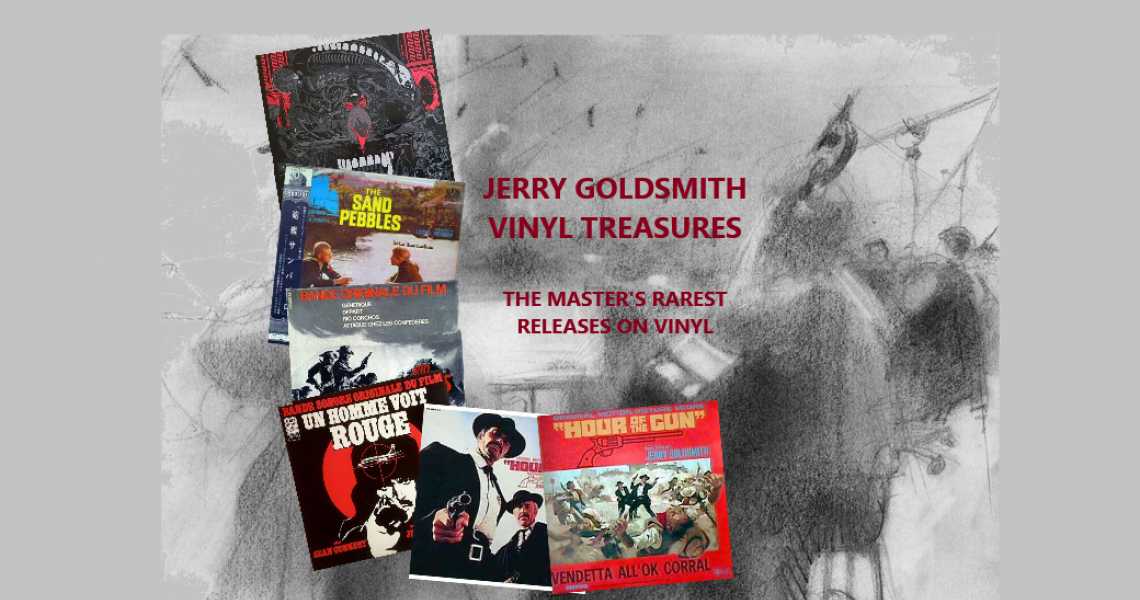 I still remember the first time i saw the cover of the Japanese edition of the soundtrack to THE SAND PEBBLES. The impression was striking. Perhaps there are many of you soundtrack collectors and film music fans who are more fond of the American release album cover, but my aesthetics' bells ring ferociously when i see those amazing photo-collage Japanese soundtrack covers. This reason alone, was enough for me to try to find the Japanese edition of Jerry Goldsmith's score realizing almost instantly, that the price to obtain my object of desire was very very high. My financials did not allow for such purchases during that years of soundtrack discoveries and pre-internet pure film music enthusiasm. This was my first encounter with hardcore obsession in soundtrack collecting...Jerry Goldsmith's Japanese soundtrack vinyls.

Thirty years passed since those magnificent discoveries of my youth, and during those years my passion for Jerry Goldsmith's music was the trigger to obtain not only the Japanese masterpieces, but also all the great vinyl treasures of this unparalleled master. Promo releases, hard to find 45 rpm single and extended play releases, obscure unique cover releases from various countries, a vast catalogue of Jerry Goldsmith's brilliance in various presentations. This is a tribute to those vinyl treasures, a journey that still continues, thanks to the latest releases of the vinyl resurrection era. 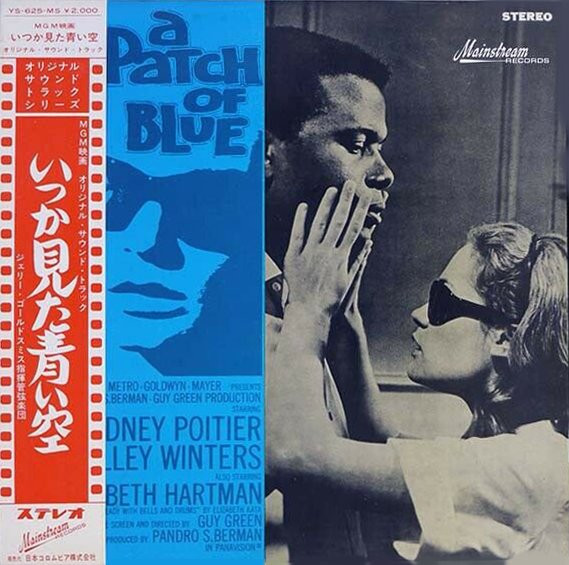 The first release of a long play soundtrack album with Jerry Goldsmith’s music occurred almost three years after his first widely acknowledged score (for John Huston’s FREUD). It was his short but very beautiful and haunting score for the movie A PATCH OF BLUE, a sleeper hit that made a huge sensation gaining Oscar attention and becoming one of the top commercial hits of 1965. The heartwarming story of the friendship between a black man and a white blind girl provided a unique opportunity for the young Jerry Goldsmith, who was building his career while colossal changes were happening in the Hollywood establishment. Director Guy Green needed around 25 minutes of score for his movie, and Goldsmith created some of his most haunting and inspired music, utilizing the harmonica as his main instrument. His music highlighted the emotions and the hidden pathos of the two main characters of the film, especially the innocence and pureness of the main female character, the blind Selina.

The soundtrack album was released by “Mainstream”, a label that specialized in soundtrack and jazz releases. Simultaneously with the American release of the album, a Japanese release was licensed including the same musical content, but a completely different album cover. This release is the oldest top collectible gem of Jerry Goldsmith's vinyl discography. The unique cover, the fact that its existence was confirmed decades after the release and the scarcity of the record are the factors accountable for its big value. A copy with its obi fetches prices of more than 200$, but we must consider the fact that this record is incredibly hard to find. There is also a Japanese 45 rpm single with a very beautiful photo cover, released also under a Mainstream label license that contains the main theme and “Grandmom’s music box” cue that also is a top collectible, mostly due to the fact that original soundtrack recordings that were released in a 45 rpm format in Japan during the 60s and 70s were not very common. They usually contained cover versions of themes or songs from the movie. 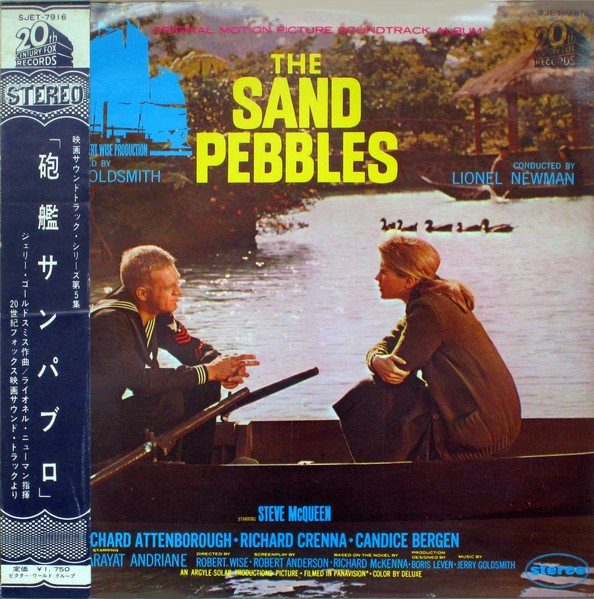 After the success of A PATCH OF BLUE, Jerry Goldsmith’s career was boosted, giving him the opportunity to work in bigger Hollywood productions. 20th Century Fox’s blockbuster THE SAND PEBBLES, directed by Robert Wise who was ultra hot after the triumph of THE SOUND OF MUSIC a year earlier, needed a big score for a large orchestra, and the composer was all in for this task. The movie was epic in tone, superbly photographed by Robert McDonald, with Steve McQueen in one of the top performances of his career as a sailor in a patrol battleship in China during the turbulent years of the mid 1920s. Goldsmith’s score was a highlight in the film, superbly used by the director, with its suspenseful and action sequences, the lush romantic theme and the oriental orchestration that set the location and the historical time frame of the movie ideally.

The production company 20th Century Fox, released the soundtrack album on a long play record in a gatefold deluxe presentation. The label licensed the soundtrack for a release in Japan with an alternate cover and this edition became a top collectible among soundtrack collectors. The striking photo in the Japanese album – that honestly had little to do with the movie’s main concept – is the main attraction for collectors, and the value of the record is very high. Of course Howard Terpning’s stunning painting in the American release cover deserves our admiration and awe, however the Japanese photo cover has a different charm.  Although very difficult to find a copy in mint or near mint condition with its obi, it is more than certain that a three digit number will leave the pocket of anyone interested in obtaining it.

A very interesting edition of the soundtrack was released in France in an extended play record with four selections from the film, including the overture and “And we were lovers” theme. Once a top collectible now has diminished in value.

Perhaps the first soundtrack release of Jerry Goldsmith’s discography, this obscure French extended play had never a confirmed release date. Possibly issued in 1964, the year Gordon Douglas’ western came out, it seems that it was licensed by 20th Century Fox, as the record label indicates. This edition was, for decades, the only source for Jerry Goldsmith’s score for the not very successful, but really entertaining movie. During his first career steps – he was not yet an established name in Hollywood – Jerry Goldsmith was not reluctant at all to reveal his modernistic compositional ideas whenever he had the opportunity. For RIO CONCHOS, the composer avoided writing exciting and heroic motives, bringing forth instead a slow folk ballad with harmonica and various strange percussions and sound devices (like the sound of the whip!).

The French EP contained three score tracks plus the song “Rio Conchos” performed by Johnny Desmond, that was never heard in the movie. The song was probably commissioned by the production company for the promotion of the film, since it was released on a 45 rpm single together with Desmond’s performance to another theme Jerry Goldsmith composed in 1964 for the movie FATE IS THE HUNTER. This particular single edition was also released with a very attractive cover in Japan. However, the French EP was notoriously sought after and still retains a high value in the secondary market since it still remains the only vinyl edition containing Jerry Goldsmith’s score.

The even more peculiar thing with this French release is that it is not the only French soundtrack release on extended play existing with Jerry Goldsmith’s music. There are also EPs with score tracks from THE PRIZE (1963 – MGM), THE SAND PEBBLES (1966 – 20th Century Fox), OUR MAN FLINT and IN LIKE FLINT (1966 and 1967 – 20th Century Fox) and HOUR OF THE GUN (1967 – United Artists). All these EPs present music formerly included in long play soundtrack albums, and this is the reason we choose the EP of RIO CONCHOS as the unique jewel among them. These releases were very sought after and still are collectibles of significant value for specific collectors who appreciate their unique retro beauty.